Most early therapies in opposition to the coronavirus illness 2019 (COVID-19) have focused the extreme acute respiratory syndrome coronavirus 2 (SARS-CoV-2) spike protein, as it’s required for viral entry into host cells. Nevertheless, many SARS-CoV-2 variants exhibit important mutations within the spike protein, thus decreasing the effectiveness of many vaccines and monoclonal antibody therapies that focus on this antigen.

In a current research printed on the preprint server bioRxiv*, researchers focus on alternate therapeutic targets for treating COVID-19 and the consequences of Gal-9 on SARS-CoV-2 an infection and the immune response. 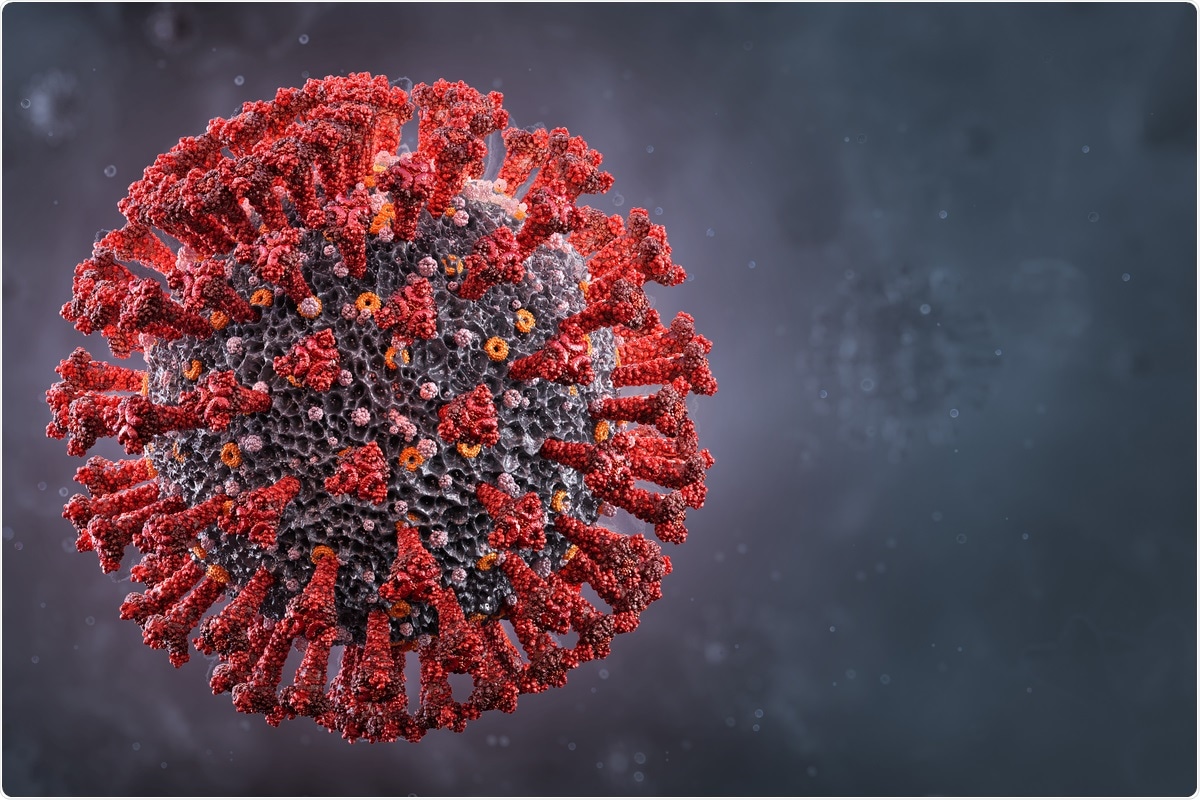 Within the present research, Calu-3 human airway epithelial cells (AECs) had been dosed with recombinant Gal-9 to find out the 50% cytotoxic focus (CC50) utilizing the MTT assay. Calu-3 cells had been then dosed with 50 nanomolar (nM), 100nM, or 250nM Gal-9 for six hours earlier than viral an infection with SARS-CoV-2. The cells then remained within the media for twenty-four hours earlier than SARS-CoV-2 an infection was measured by quantitation of nucleocapsid (N) gene expression.

Because the Gal-9 focus elevated, SARS-CoV-2 an infection elevated considerably in a dose-dependent method, with the best concentrations displaying as much as 27-fold will increase. The discharge of infectious virus into the supernatant elevated in an analogous method, as measured by the median tissue tradition infectious dose (TCID50). Immunofluorescence assays with particular staining of the N protein confirmed the enhancement of virus manufacturing by Gal-9.

The researchers then investigated the precise stage of the replication website impacted by Gal-9 by analyzing Calu-3 cells handled with 350 nM Gal-9 earlier than and after SARS-CoV-2 an infection. To this finish, pre-treated cells confirmed considerably increased virus manufacturing, thus suggesting that Gal-9 impacts the early stage of the viral life cycle. 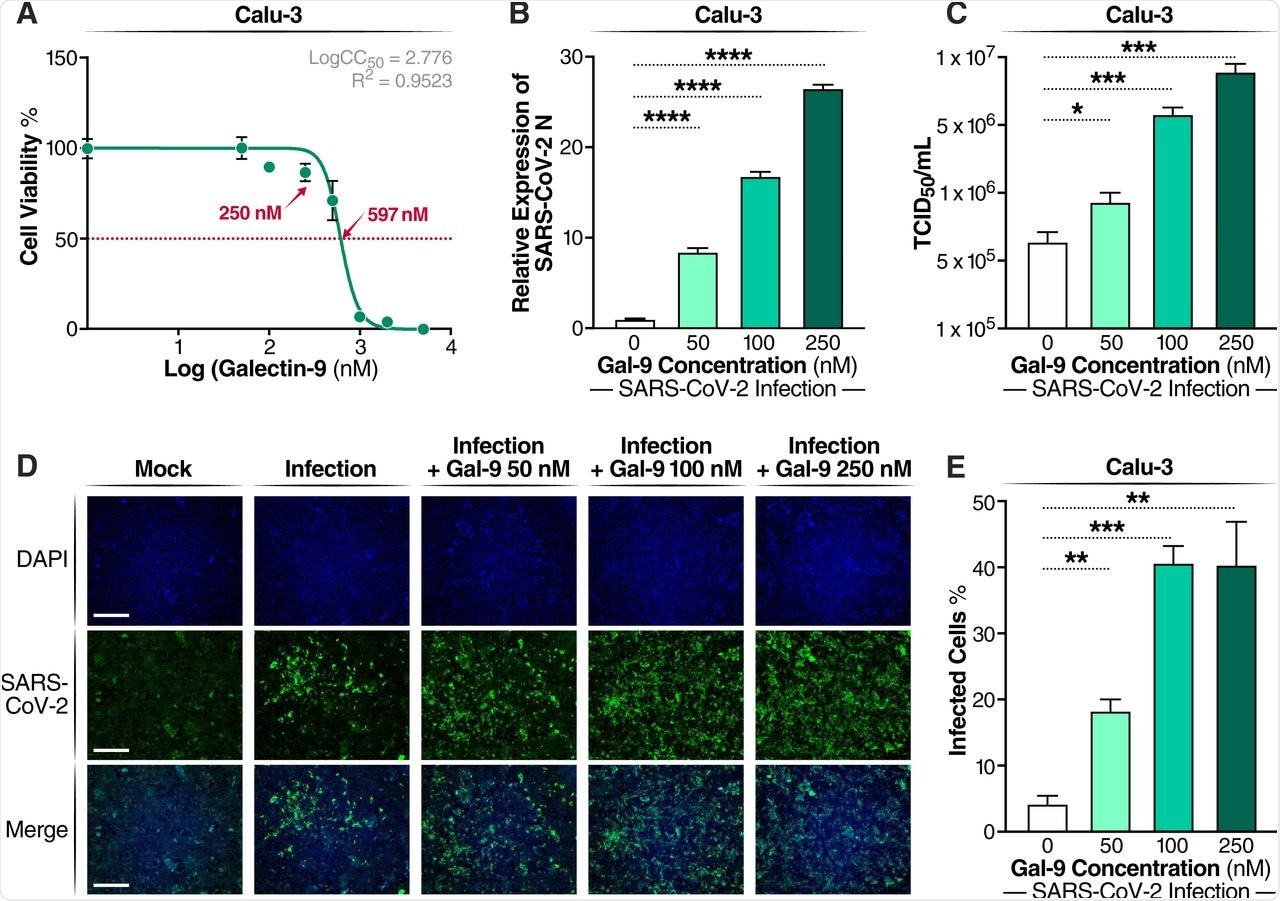 Gal-9 will increase virus manufacturing in SARS-CoV-2-infected Calu-3 cells. (A) Mobile toxicity was examined in Calu-3 cells utilizing an MTT assay and was expressed as relative cell viability as in comparison with Gal-9-untreated management (set at 100%). The LogCC50 worth for Gal-9 is displayed. The purple arrows symbolize 250 nM and the CC50 worth (597 nM) of Gal-9, respectively. (B) The impact of Gal-9 on viral N gene expression in Calu-3 cells was measured by RT-qPCR. Cells had been pretreated with Gal-9 on the indicated concentrations for six hours, adopted by an infection with SARS-CoV-2 (MOI=0.01) for twenty-four h within the presence of Gal-9. 24 hpi, cells had been collected for RNA isolation and RT-qPCR focusing on the N gene. (C) Infectious virus launch within the supernatant of SARS-CoV-2-infected Calu-3 cells handled with various doses of Gal-9 as described in (B) had been measured utilizing TCID50. (D) Immunofluorescence staining of Calu-3 cells with DAPI (blue) or anti-N Ab (inexperienced) pretreated with Gal-9 on the indicated concentrations, adopted by an infection with SARS-CoV-2 as described in (B). Scale bar, 500 μM. (E) Quantification of SARS-CoV-2 contaminated cells in Calu-3 cells (proven in panel D). Knowledge are consultant of the outcomes of three impartial experiments (imply ± SEM). Statistical significance was analyzed by t check. p≤0.05 [*], p≤0.01 [**], p≤0.001 [***], p≤0.0001 [****].

Cells had been then incubated at low temperature for 2 hours, adopted by the detection of any connected particles after triple washing of the cells. Gal-9 remedy confirmed substantial will increase in cell attachment in a dose-dependent method.

To find out if this statement was depending on the angiotensin-converting enzyme 2 (ACE2) receptor, cells had been handled with a aggressive anti-ACE2 antibody proven to dam SARS-CoV-2 pseudovirus an infection. This agent efficiently blocked Gal-9 enhanced an infection as nicely.

To find out the mechanisms liable for the enhancement of an infection, cell floor ACE2 and transmembrane serine protease 2 (TMPRSS2) expression had been measured by movement cytometry. To this finish, Gal-9 didn’t seem to have an effect on the expression of ACE2 nor TMPRSS2.

Sandwich enzyme-linked immunosorbent assay (ELISA) was then used to look at the binding between ACE2 and the spike protein. This experiment confirmed considerably enhanced binding when cells had been incubated with Gal-9.

Microscopy pictures confirmed that SARS-CoV-2-mediated cytopathic results had been additionally way more pronounced in handled cultures. As SARS-CoV-2 is usually related to immune dysfunction, the immune response in each handled and untreated cells revealed that Gal-9 induced the expression of interleukin 6 (IL-6), IL-8, and tumor necrosis issue α (TNF-α) to modest ranges earlier than SARS-CoV-2 an infection.

Nevertheless, if the cells had been contaminated with SARS-CoV-2, these identical immune responses had been induced to a lot increased ranges at earlier time frames. With out Gal-9 remedy, IL-6, IL-8, and TNF-α had been induced at 24, 26, and 24 hpi, respectively; nevertheless, handled cells confirmed comparable ranges at 9, 12 and 9 hours.

Ribonucleic acid sequencing (RNA-seq) evaluation on Calu-3 cells contaminated for twenty-four hours with or with out Gal-9 remedy was used to higher perceive the transcriptional impression of Gal-9. Differentially expressed gene evaluation revealed that just one protein-coding gene of RNU12 confirmed considerably altered expression following SARS-CoV-2 alone. Gal-9 remedy with out an infection brought about important modulation of 87 genes. Cells contaminated within the presence of Gal-9 skilled a major change of their transcriptome, with 1,094 differentially expressed genes.

Ingenuity Pathway Evaluation allowed the enriched pathways corresponding to those genes to be analyzed. This revealed that a number of pro-inflammatory proteins and pathways had been activated within the presence of contaminated cells handled with Gal-9 together with IL-6, IL-8, and JAK-STAT signaling pathways.

Lastly, AECs cultured on the air/liquid interface (ALI) had been pre-treated with Gal-9 after which contaminated with SARS-CoV-2 for 36 hours. Productive an infection might be seen in all cultures from 5 totally different donors. Moreover, real-time polymerase chain response (RT-PCR) revealed that IL-6 expression was induced after an infection in handled cells.

The researchers of the present research have demonstrated that Gal-9 enhances the flexibility of SARS-CoV-2 to copy inside cells and that that is impact probably, a minimum of partially, because of the enhanced spike protein-ACE2 binding. The present research has discovered that Gal-9 handled cells present increased ranges of immune response a lot sooner than non-treated cells and exhibited considerably altered expression of immunologically energetic genes.